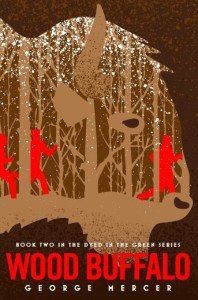 Standing in the middle of the creek surrounded by a pack of wolves intent on killing something, Charlie wondered what his next move might be. For all of his years trapping in the delta, he had never known wolves to make even the slightest overture toward a person and fervently hoped they wouldn’t start now.

Chilled by the plunge in air temperature as the late winter sun dipped below the willows, Charlie tried valiantly to project a steely resolve to the seven wolves and prayed that their ability to smell fear didn’t reduce his chances.

Gradually, Charlie sensed that their attention was shifting to focus on the cow bison and he felt a slight sense of relief.

Perceiving that the embattled bovid must have also noticed the shift, Charlie assumed the injured animal was resigned to her fate as she slowly turned her head to survey all seven attackers. Her quick breaths had subsided and she now emitted slow, deep pulses of warm air that billowed into small white clouds of steam above her ice encrusted face.

Along with the rhythmic breathing of the wolves, which seemed unconcerned about the protracted pace of the hunt, the scene had a slow motion feel to it that belied its inevitable outcome.

With a series of short yips and snarls seemingly meant to direct his charges and restore the purpose of the process, the alpha male momentarily diverted his attention away from the bison to the other members of the pack.

At the same instant and without warning, the cow bison attacked, charging at the large male and taking aim at the leader’s exposed flank. The younger wolves responded quickly, nipping at her hind quarters to deflect her advances while carefully avoiding her potentially lethal hooves.

The alpha male deftly sidestepped the bison’s initial outburst but her surprising speed caught him off guard with a sideways head butt that catapulted the large wolf into a snowbank. As the younger wolves counter-attacked the bison on her flanks, the older wolf was able to regain his footing and rejoin the effort, the thrust and parry of the battle slowly moving the cow and her pursuers further down the creek away from Charlie.

Easing his way into the forest and finding the packed snowmobile trail, the old trapper slowly put some distance between himself and the fading vocalizations of the wolves. The hard-packed trail was easy to follow but Charlie felt a new heaviness to his stride, hinting at the monumental effort it had taken to elude his pursuers.

He was not getting any younger and it was starting to show.

Even twenty years ago he would have given the two men a run for their money, and truth be told there would have been a degree of satisfaction in laying a beating on Quentin Spence. But now approaching seventy, Charlie was no match for either man, at least physically.

Survival now depended on delving into the knowledge base that kept him going for years as an active trapper, harnessing the teachings of his father and mother who had raised him in the bush until the government agents convinced them his future would increasingly depend on a white education.

Whenever he could, Charlie returned to the bush and integrated his knowledge of a consumer driven society with his ability to find the furs that were fetching the highest prices on international markets. The delta’s muskrat or “rats” were his bread and butter, but when the long-haired furs of lynx and wolves commanded top dollar on the fashion show catwalks of Europe, he focused his efforts on the forests bordering the massive wetland.

The frame cabin in the woods was a by-product of those days, providing Charlie with a convenient halfway house that saved him time travelling to the large log structure along one of the delta’s major rivers that served as his main cabin. Although rudimentary, the smaller cabin was well stocked despite its lack of use since prices for long-haired fur plummeted in the mid 1980’s.

In recent years Charlie made infrequent stops at the cabin but had visited the small shack just days before, breaking a trail that now provided solid footing under the fresh snow. Having left his snowshoes behind with his snowmobile and without the hardened track to support him, trying to make the cabin on foot at this time of year would otherwise have been next to impossible.

As darkness overtook him Charlie felt his way along the route and estimated how much longer it would take before he could finally put his feet up in front of a roaring fire. He always left the tin jenny prepped with newspaper and dry kindling, a box of matches sitting at the ready on top of the lid. In less than an hour he should be able to cover the remaining distance and would finally be able to shed his burden of heavy winter clothes, distributing them on the wooden pegs scattered around the shack to dry them out overnight.

As much as he wanted to stay longer, he would have to go back for his snowmobile in the morning. But he needed to be well prepared in the event that Quentin had tampered with the machine, leaving him stranded on foot in the vast delta.

No one was expecting him back in town for several days and even then no one would be looking for him right away since he frequently showed up days later than originally planned.

His daughter had pleaded with him to use the new single side-band radio she bought for his birthday but Charlie had left it unopened on the kitchen table, thanking her but suggesting that he would only use it when he couldn’t take care of himself anymore.

If he could lift his heavy feet any higher he probably would have kicked himself right now for the stubborn streak that usually inserted itself between his daughter’s concern for his safety and the pound of pride that was his calling card. With any luck, it wouldn’t be his undoing.

Despite the late hour, Charlie instinctively found the turnoff to the cabin, following the path of bent willows directing him along the snowmobile trail to a massive white spruce on a slight rise of land in the delta’s main basin.

The silhouette of the cabin was barely noticeable in the filtered starlight under the canopy of evergreens. As Charlie approached the cabin’s door he saw the roof loaded with more than two feet of snow and icicles extending down to the snowdrifts rising up along the cabin walls, reminding him that it had been an exceptionally big snow year.

Somewhere in the distance a lone wolf howled, followed by the fading yips and barks of a well fed pack.

Pulling off his snow mitts and fumbling for the handle, Charlie lifted the latch and pushed the door open. Peering into the darkness, Charlie stepped over the snow covered threshold onto the plank flooring and turned toward the woodstove sitting in the corner. Rubbing his hands together he reached out and touched the box of matches, grasping them in his cold fingers as he knelt before the stove. Opening the door he struck a match and laid it at the edge of the old newspaper, watching as the tiny blue flame morphed into an orange blaze that quickly engulfed both paper and kindling.

Within minutes the kindling sparked and popped sending small embers up into the tin chimney projecting into the night sky. Grabbing a large piece of wood, Charlie laid it gently into the fire and closed the door, fully opening the drafter to maximize airflow into the stove. Rising from his knees, Charlie felt for the damper on the chimney and turned the handle. As the fire roared to life, Charlie rubbed his hands again and stood for a moment to relish the notion that he had made it one more time.

As his eyes adjusted to the light he found an old candle on the window sill above the small table and struck another match. The wick slowly caught fire and Charlie watched a tiny curl of black smoke as it rose above the table and wafted past him toward the bunk bed along the back wall of the shack.

“What took you so long?” said a deep voice reaching out from the lower bunk, accompanied by the metallic click of the shotgun hammer being cocked.