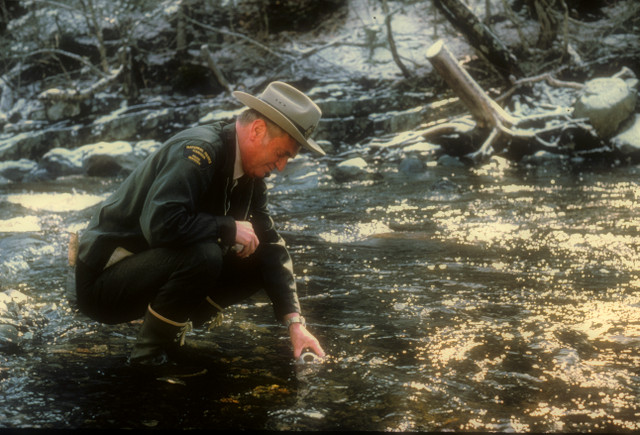 I was sorry to hear this morning about the passing of Mac Savoy, former Kouchibouquac and Cape Breton Highlands National Park Warden and for a few years our neighbour in Petit Etang.

Mac was truly one of the “characters” who made our careers with Parks Canada entertaining and lively and who inspired some of the stories that I write today. Like so many of the former veterans who found a home in the national park system, Mac brought those qualities that set these people apart from the rest of us, especially a joy of life and for life that results from having stared down death during his time overseas in World War 2. Like so many veterans, Mac never talked much about the war, but his few “reveals” opened my eyes and garnered him the respect that all veterans deserve.

And of course, Mac came back from the war with more than memories and stories.

His Scottish war bride, Daisy, was the real deal and could match Mac in every way. In fact, they were inseparable. You never thought of Mac without Daisy.

Mac and Daisy were the life of a party and King and Queen of any dance floor.

And they had a sense of humour.

When Mac and Daisy came to our wedding they shared a hotel room with good friends Norman and Bonnie Wentzell. Mac complained throughout the evening that his feet were killing him on the dance floor and only later did he realize that he and Norman had mistakenly worn the other’s shoes. Norman, whose own shoes were a few sizes smaller, apparently thought he had the most comfortable shoes on that he’d ever worn!

In another instance, Daisy was telling us about a lady who always visited her at mealtime who she didn’t quite know how to un-invite. After feeding her, Daisy proceeded to put their plates on the floor and let their dog lick them clean before she placed them back in the cupboard. When her “guest” inquired if she washed the plates Daisy responded that they were clean enough … and she never had to serve the lady again!

These stories and so many more, kept us in stitches, and still provide fodder for reminisces to this day.

And they will continue to be part of the memories we have of Mac and Daisy.

I think Mac had a good life and no doubt will be missed by Daisy and their family. He was a good man, an excellent coworker and a great friend.

He also had an uncanny ability to let people make and learn from their own mistakes without shoving it in their face, but that’s another story!

In closing, I can only paraphrase the inscription on the Veteran’s Monument on French Mountain in Cape Breton Highlands National Park, because unlike other veterans who died overseas, Mac got to “know the beauty of this place, see the seasons change, enjoy nature’s chorus” …

“All we have we owe” to people like Mac, who helped fight for our country and “so preserved our heritage”.

You will be remembered!