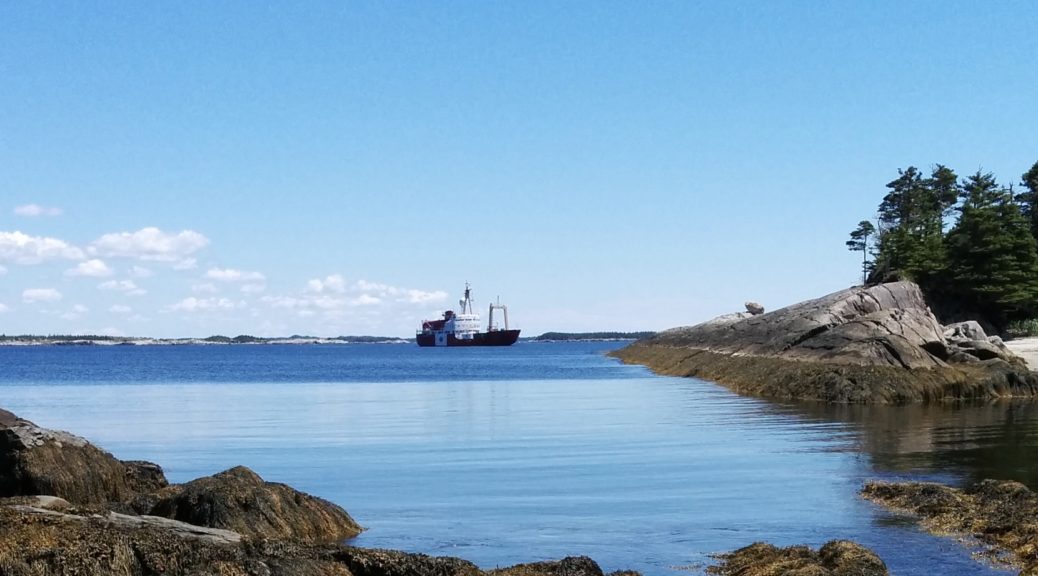 Bruce Guthro doesn’t know it but I am standing giddily behind him, a back-up singer on the stage at Stanfest, belting out the chorus for Northwest Passage along with my shipmates from the Canada C3 expedition. I’m not sure how the others feel but the experience for me is surreal, not unlike how the rest of our ten-day leg will feel when I finally get my feet back on solid ground in St. John’s.

It has been a whirlwind journey, getting an offer to join the expedition on the previous Monday, and initially turning it down so I could focus on peddling my latest book, then giving myself a mental kick in the ass and quickly redialing and saying yes. It’s the smartest move I’ve made in a while.

Now as I sit on the flight back West, I’m just beginning to process what happened over this past two weeks, reflecting, trying to piece it all back together; the flight from Victoria to Charlottetown, meeting some of the participants at the airport, taxiing to our ship, the introduction to the C3 team, meeting my cabin mate, the first briefing.

It seems so long ago.

We covered a lot of ground, both figuratively and literally.

And a lot of ocean.

We experienced some of Canada’s highs, and struggled with its lows.

It was an emotional rollercoaster unlike any I’d ever experienced before.

And I’m only beginning to understand the significance of it all, the juxtaposition of time and place that put us in Charlottetown, the Cradle of Confederation, on the one hundred and fiftieth anniversary of our country’s birth as a nation.

I should have been in a celebratory mood right until the stroke of midnight, but already some truths were settling in, and somehow the fireworks that night seemed trite.

It was as if our first day, as planned out as it was logistically, with some of us riding a float in the Canada Day parade in North Rustico and others taking in events in Charlottetown, was meant to coalesce around the bittersweet notion that while we had lots to celebrate, we shared a history that dampened the spirit of the moment.

Buzzkill was a word that came to mind.

I think it had to do with the first structured event of the leg, a walking tour with two young men playing the role of Confederate and anti-Confederate aristocrats who went on to describe events leading up to the meeting in Charlottetown 150 years ago that led to Confederation. I couldn’t help but think as they spoke in character, especially when it came to questions about the Mi’kmaq, whose ancestral lands we were standing on, that they were doing a huge disservice to those people, unknowingly I suspect, but doing so just the same.

The irony of the situation intensified when we were led past Government House and into the chamber around which a group of older, white males, decided the future of early Canada a century and a half ago, where our discussion was initiated by a prayer and welcome from the regional Mi’Kmaq chief and a drum song from a local elder.

The level of discomfort in the room was palpable but dissipated somewhat when one of the Canada C3 participants pointed to the fact that our First Nations hosts were seated in the back and that our “round table” was actually taking place around a rectangular table where seating position implied power for some and less for others.

It seemed we were in for a rocky start to Leg 4, but truth be told, this willingness to speak up and challenge convention probably helped solidify the resolve of the Leg 4 participants to actually participate, to speak their minds and share their perspectives, underlying the real reason we’d been brought together in the first place.

Going forward, the rest of the journey embodied the sentiments of that first day, highlighting the strengths of our country’s resilience at Stanfest in Canso, of its diversity at Pier 21 in Halifax and of its absolute beauty at 100 Wild Islands, but also recognizing the realities of the past and present at Membertou and Eskasoni in Cape Breton, Hope Blooms in Halifax, and Francois and Portugal Cove South in Newfoundland.

Wherever we went the legacy of our country’s misdealing with indigenous peoples, the challenges for inner city youth, and the economic realities of remote communities struggling to survive, were not far from our collective thoughts.

Together they combined to shine a light on the need to reconcile our past, celebrate our diversity and face the future with a sense of renewed passion to make Canada an even better country than it is today.

But these things won’t happen if we sit on our hands and wait for others to take up the torch. More than anything else, the take home message from our leg of the Canada C3 expedition from coast to coast to coast was to take action, in whatever ways we felt we could, to bring meaningful change to our country.

So no one is left behind.

For many of us, as it was that night at Stanfest, it will mean getting out of our comfort zone and taking the stage, and either individually or collectively doing what we know to be right, taking solace from the fact that we have a shared interest in getting the next 150 years right.

And that together, we can make a difference.

One thought on “Leg 4 Revisted”