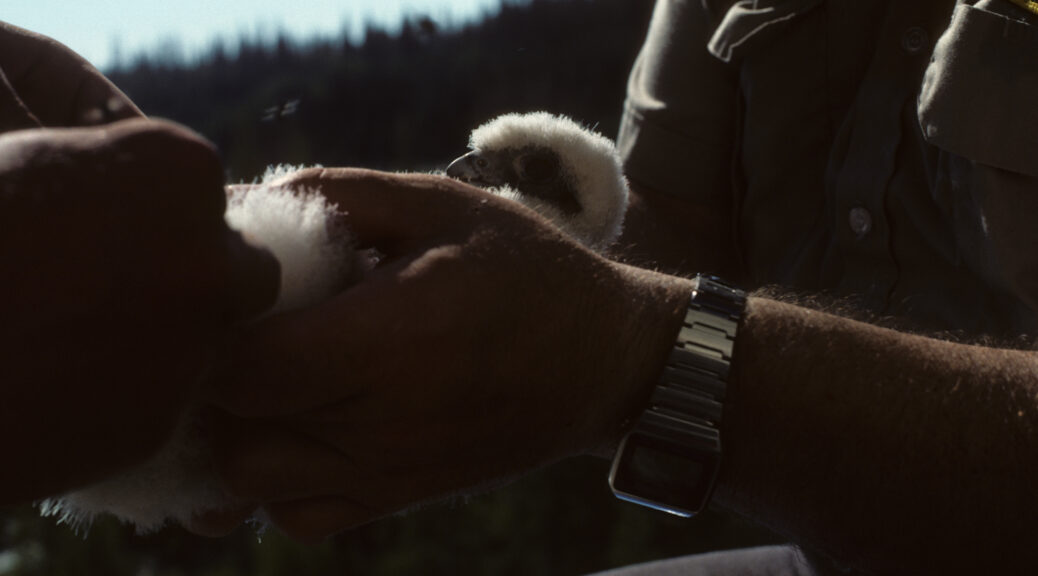 One of the highlights of transferring to Fundy National Park in the early 1980’s was the fact that at the time, Fundy was probably leading the Atlantic Region national parks, if not the country’s, in conducting natural resource management projects, including three very high profile species reintroductions for American marten, Atlantic salmon and Peregrine Falcons.

I don’t know the specifics of the genesis of these projects but suspect they were a collaborative effort on the part of the park’s former Chief Park Warden Paul Galbraith (who subsequently moved to Terra Nova National Park), and other park managers at the time including Chief Park Warden Duane West, the park’s resource management advisor Stephen Woodley, and Park Superintendent Ken East.

In my career, these four men stand out as some of the more progressive thinkers in Parks Canada and I was lucky enough to have a continued working relationship with them at various points throughout my more than three decades with the outfit as we moved across the country working in different national parks.

The Peregrine Falcon project in particular also shone a light on the many skills of one of the local park wardens, George Sinclair, who would become the poster boy for the program and shoulder much of the responsibility for its success, including installing the young birds in a hack box situated on the cliffs high above Point Wolfe and seeing them through their first few weeks of acclimatizing to their new surroundings before fledging.

My own role was more limited but because I had a boating background acquired from my time in Terra Nova National Park, and because most of the other wardens, despite being from the Bay of Fundy area, were landlubbers in the truest sense of the word, I was given the honour of manning the park’s only seaworthy vessel, a small inflatable Zodiac, on the day of the birds’ release.

That morning I was to position the Zodiac in the small cove at Point Wolfe, directly below the peregrine hack box, in the event one of the fledglings ended up in the water. If that happened my job was to save the bird (I think at all costs was implied).

Piece of cake, I thought.

I’d handled lots of bigger boats in rougher seas and come away unscathed.

Launching the boat at high tide on the flat calm of the Bay of Fundy, I fearlessly ferried to the middle of the cove and threw out the anchor, planning to remain as stationary as possible until the birds were released and had safely flown away from the site.

I would save any bird that foundered and ended up in the drink.

And then the tide turned, literally.

Anyone who has seen the Bay of Fundy fill with water, or empty, as the case may be, knows only too well the magnitude of the change.

Here’s how Google describes it …

“On a flood tide, 160 billion tonnes of seawater flows into the Bay of Fundy — more than four times the estimated combined flow of all the world’s freshwater rivers during the same 6-hour interval. The vertical tidal range can be over 16 metres — giving the Bay of Fundy the highest tides in the world.”

On an ebb tide, the reverse is true.

Here’s how I described it that morning …

As the Bay of Fundy emptied, I should have been proud that my anchor held.

And I was initially.

However, as the force of the tide created a massive bow wave in front of the Zodiac, giving the appearance of going upstream in a raging rapid, I was certain the boat would swamp and I would become the former Wolfe Lake warden.

I had never before and have never since seen anything so powerful happen so fast.

And while I was panicking, the Peregrines were starting to fly.

Lookouts were reporting the bird’s first flights and the park radios were buzzing with excitement.

First one bird, then all four young were airborne for short periods, hopscotching along the cliffs, finding a secure foothold in red spruce as they continued to test their wings.

Meanwhile, a hundred metres below, a very scared park warden fumbled for his Leatherman, the knife specifically, planning to saw away at the anchor line, riding tautly against the rubber-neoprene tubes of the inflatable boat.

Cut the rope and I’d be home free.

Cut the rubber-neoprene tubes and I’d be … you guessed it.

Thankfully I managed to cut only the rope.

And while others were caught up in the magic of restoring Peregrine Falcons to the Bay of Fundy that day, a hugely successful reintroduction by the way, I was bowing to the Bay gods, eventually landing the Zodiac and dragging it, as well as my sorry ass, across the wide expanse of mudflats, back to the warden truck … as quietly and unceremoniously as possible.

A humbling experience if ever there was one.